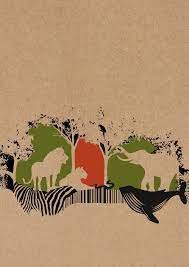 The subject of animals comes up every once in a while, and how humans should be concerned about certain other animals because those animals are dangerous.  But humans are animals, and as animals, humans are by far, the most dangerous animals on earth – we kill everything living on earth.  And, to frustrate matters even more, many humans appear to have no conscience, and certainly have no empathy for other humans, other animals, or for the environment.

But maybe I’m being too harsh on me and my neighbors.  Well, yes, truth be known, I am being too harsh.  I am trying to make a point.  My point is that of all animals on earth, only humans are able to cause death and destruction without remorse.  Our planet is suffering mightily, and the problem is the human animal – it’s not the tiger, or the elephant, or the bear, or the snake, or the insect – it’s the humans.

And, for the record, I should note that it’s not all humans causing this suffering and damage – it’s just some humans.  Organized humans.  Sociopathic humans.  Humans that run big businesses, big religions, and big governments either directly or by hidden or indirect controls.  Smart humans.  Evil humans.

In all of animal life there are predators and there are victims.  If we look at the food chain, we understand the lion will go after the zebra.  The snake will always go after the mouse.  The hawk will always go after the rabbit.  The big fish will go after the small fish.  Etc.  You get the idea.  But when we look at the food chain, the predator always goes after members of another species for its food source and it only hunts when it is hungry.  And, from observation, it rarely, if ever, kills and eats its own kind.  This is not true of human predators.

But, in the animal kingdom there is a specie preservation gene that tells the wolf it’s OK to kill and eat other species, but don’t kill or eat other wolves.  The same holds true with the cats.  And the bears.  Etc.  Protect your own kind.  But this ‘self preservation’ gene does not appear in humans.  So, predator man kills other men.  Man also kills other animals when he is not hungry – just for sport.  Man destroys his environment.  Man is a problem for the earth.

Which gets us to the point of inspecting the organizations that man creates and uses in life.  Since I mentioned the Native Americans, let’s start with them.  Except for some eastern tribes, the Native Americans were not locked into ownership or control of the land.  All Native Americans lived in tribes, and all tribes had chiefs.  But the chiefs were not the ‘boss’ members of the tribe – the chiefs helped manage tribal affairs via voluntary consensus and wisdom.  In fact, everything done in the tribes was concerned with individual strength, abiding by consensus within the tribe, helping others, defending the tribe against other predators (including man), etc.  There was mutual respect for other animal species, and respect for the environment.  Everyone was equal in importance.  Membership in the tribe was voluntary.  Except when survival was the primary concern, tribal life was harmonious. The tribal system worked.  It wasn’t perfect, but it worked.  And, yes, some Native Americans were brutes, and they did bad things.

Now, let’s look at other men.  The European man.  The eastern man.  They too lived in tribes, but these humans allowed (or were forced to accept) single men, or organized groups of men, to rule over them.  There was no equality among these men – there were classes of men (predators, masters) who ruled by organized force and violence.  These human predators were concerned with their roots, with their status, and with their blood types.  They didn’t care about anything else.

So, here was a difference.  Some men lived by consensus and in harmony with their environment, and some men lived by organized and structured force and violence.  In America, the organized men (the Europeans) who dealt in force and violence were easily able to overwhelm the men with lived at peace in their environment (the Native Americans).  And they did.  Was this a good thing?  Why couldn’t both groups simply co-exist within the same land?  The predators wouldn’t allow others to live.  The predators lied, they deceived, they killed, and they destroyed.

I’m bringing up this subject because in America today, we have a divided society.  We have a two class society, largely European derived, and force and violence predator based, in which one class (predators, masters) rules over the other class (slaves) with force and violence.  And if you think of the subject of entitlements, the masters feel ‘entitled’ to be rulers (because they are so smart, or because of their blood types) and they feel no conscience or remorse in their dealings with the slaves – or with the environment in which we all live.  For me, this is another WTF moment.  These are the destructors – these are the haters.

Our country has been bled dry by these masters, and our environment has been severely damaged.  The weather is now being controlled, and the environment, including the animal and plant life, is being poisoned by the masters.  Our young men are being used as war machines by the masters to kill other humans in other countries.   To keep the slaves in line, the masters lie to the slaves, and then blame all of the harm being done on earth on bad slaves.   The masters – the real culprits in this open air drama, always escape responsibility and accountability.  By blaming the victim for the problems they (the masters) cause, the predator always goes free.

And, even worse, if we are to believe people like George Green, the masters are doing their best to kill off 6 billion or more human slaves.  There are just too many humans to easily control.  Simple question:  who the hell do these people think they are?

There is no balance in life because these masters, aka criminals, are irresponsible and sociopathic in everything they do.  They murder, rape, and pillage at will, and they deal exclusively in deceit and fraud.  They are not better than other men, and they certainly have no compassion for other men, or for our environment.  If someone needs to be killed off – it is these elite predator thugs.

People who know me know that I do not approve of the Zionist ideology, nor do I agree with or approve of anyone who follows the precepts laid out in the protocols.  By their own written words and by their own actions, it is clear the Zionists are some of the worst and most evil predators in life.  They suffer my anger because they have exposed themselves as the cretins they are – they have thus become easy targets for me.

But they are not the only evil bastard cretins, and it is now time to expose the rest of the cretins.  If these evil bastards are really one branch of aliens that are farming the earth for humans, then let’s get rid of the aliens.  They’ve done their job, now it is time for them to get the hell out of Dodge.  I don’t know about you, but plantation life does not suit me very well.

And if the masters choose to be masters because of their intellect or their blood lines, then they have to assume responsibility for the rest of the humans.  But they don’t.  They plunder the other humans – they treat us like cattle.  The masters believe they are ‘better’ than the rest of the humans.  They like the class separation concept – they like the unearned entitlements they get.  They are lazy bastards.  They blame the slave’s conditions on the slaves, not on their own mismanagement and their own psychopathy.

The argument could be made that not all masters are evil bastard masters, and this may be a valid observation – I wouldn’t know.  But I believe that Lord Acton was right in his observations about power.  The bigger and more powerful the master, the more evil the master is.

My opinion is that the only viable resolution for this human dilemma is to remove the evil bastards from power.  It is time to raid the palace, remove the evil occupants, and shut down the palace.  Restore power to the people – all the people, not just the elites.  Let us all bear responsibility for our own lives, without the force and violence that comes from big banks, big business, big religion, and big government.  If it’s big – it’s bad.  The ‘big’ plantation system just isn’t working out for anyone but the ‘big’ masters.  Screw that!

It is time for man to return to the voluntary lifestyle of the Native Americans – this European two class society thing just doesn’t work out well for the earth, its animals, or its environment.  And, I suggest this purging would be good for the rest of the world to do also – this is not just an American problem – this is a human problem.

Freedom of individual actions, not forced slavery and subservience is what every animal seeks.  Our country was allegedly begun to preserve the freedoms and rights of the human individual, but it is (or should be) clear to us all now that we live in a totalitarian police state – nothing is done to preserve our freedoms and our individual rights.  The country’s government is as lawless and as controlling as any in Europe, either now or 239 years ago.