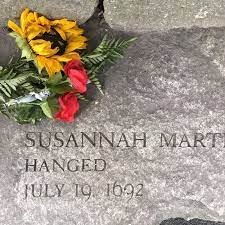 Susanna North was baptized in Olney, Buckinghamshire, England September 30, 1621. The English-born Susanna was the fourth daughter, and youngest child, of Richard North and Joan BARTRAM North. Her mother Joan died when she was a child. Her stepmother was Ursula SCOTT North. Her family moved to Salisbury, Massachusetts around 1639 when Susanna was about 18 years old. The North family were some of the first settlers of Salisbury, which is located 40 miles north of Boston. The family lived with the other settlers on plots along the “circular road,” now known as the triangle formation of Elm street, School street and Bridge road in Salisbury square. At the time, the area was inhabited by Penacook Native Americans, wolves and wild animals.

Susanna married the widower George Martin, a blacksmith, on August 11, 1646 at Salisbury.  George and Susanna Martin moved to Amesbury, Massachusetts in 1654.  George Martin is shown as one of the first settlers of Amesbury on a commemorative plaque in the Amesbury-Golgotha Burying Ground. Susanna and George were the parents of eight children. Through their daughter, Jane, Susanna is the 5th great grandmother of U. S. President Chester A. Arthur.

[Side Note: Chester Arthur is now known as the first usurper to the US presidency (he was not a natural born citizen because of his father’s foreign citizenship when he was born) Barack Obama was the second usurper to the presidency, for the same reason. Also interesting is that both usurpers were lawyers.]

Descriptions of Susanna say that she was short, slightly plump, active, and “of remarkable personal neatness.” She was also said to be very outspoken, contemptuous of authority, and defiant in the face of slander which followed her for years.

During the first 23 years of her marriage, Susanna’s name appears twice in public records. In 1647 or 48 she was fined 20 shillings for an unnamed offense and in 1667 her husband George objected to her seat placement in the meeting house. Perhaps he felt it was below her station.

In 1669 Susanna was required to post 100 pounds bond to appear in court on a charge of witchcraft, a capital offense. At the same time George Martin sued William Sargent, Jr. for slander for saying that “… said Martyn’s wife had a child at Capt. Wiggins and was wringing its neck in Capt. Wiggins’ stable, when a man entered, and she took him by the collar and told him she would be the death of him if he told”; he sued William Sargent “…for saying his wife was a witch and he would call her a witch.” George also sued Thomas Sargent “…for saying that his son George Martin was a bastard and that Richard Martin was Goodwife Martin’s imp,” (a witch’s familiar.)

Charges were dropped against Thomas Sargent, William Sargent, Jr. was found guilty of accusing Susanna of “fornication and infanticide” and George was awarded (in what appears to be a public insult) the amount of “a white wampam peague (colonial currency) or the eighth part of a penny damage” by the magistrates. William Sargent (Sr?) was acquitted of witchcraft slander, although, “the Court did not agree.” The records of Susanna’s first trial for witchcraft have not survived, but as she was around for another 23 years, we might assume that she was acquitted.

In October, 1669 George Martin was sued by Christopher Bartlett because Susanna had called him a liar and a thief. The verdict was against George and Susanna but they had other problems to deal with. At that same court session, their son Richard was “presented by the grand jury at the Salisbury Court, 1669, for abusing his father and throwing him down, taking away his clothes and holding up an axe against him.” The court found him guilty and sentenced Richard to be “whipped ten stripes.”

In 1671, George and Susanna (her sister Mary Jones would join them later) became involved in lengthy litigation over Richard North’s estate.  In October 1674, their inheritance would be lost when the court found against them.

George Martin died in 1686 and Susanna remained in Amesbury.  In 1692, at the age of 71, Susanna was accused of being a witch by several residents of Salem Village (now the Town of Danvers), which is located about 25 miles south of Amesbury.

The Rev. Cotton Mather said about Susanna, “This woman was one of the most impudent, scurrilous, wicked creatures of this world; and she did now throughout her whole trial discover herself to be such a one. Yet when she was asked what she had to say for herself, her chief plea was that she had led a most virtuous and holy life.”

Mr. Merrill, in his History of Amesbury described Susanna differently “The idea of snatching this hardworking, honest woman from her home to be tried for her life by those who never knew her, and witnesses who were prejudiced against her…. is almost too much for belief. …Allowed no counsel, she was her own lawyer, and her answers are remarkable for independence and clearness. She showed herself to be a woman of more than ordinary talent and resolution.”

On April 30, 1692 a warrant was issued for Susanna’s arrest on a charge of witchcraft and she was arrested on May 2nd. “When she saw Orlando Bagley approaching on the morning of her arrest, little did she dream of his errand. He was a personal friend of long standing, and we can but faintly imagine her surprise when…” he read the warrant.

During her preliminary examination the same day, she vigorously answered the charges against her. When the “afflicted girls” began having fits, she laughed out loud. When the magistrates asked why she laughed, she responded, “Well I may at such folly.” She refused to express any thoughts on what may have ailed the girls but bluntly stated that she didn’t think they were bewitched. Her further testimony show that she realized the seriousness of her situation and she adamantly maintained her innocence.

“The mental anguish and suffering of the two and a half months while she lay in Salem jail… is beyond our power of description.” Susanna Martin underwent the indignity of a physical examination on June 2 1692. The examinations were intended to discover whether the accused had any physical abnormalities, especially anything that could be used to suckle a familiar or even the devil himself.  Susanna was examined twice during the same day; at neither examination was any abnormality discovered, but at the first her breasts appeared to be full and at the second slack. Doubtless the magistrates found this apparent indication that she had actually suckled even more satisfactory than an abnormal “witch’s teat.”

On June 26, 1692 her trial began. Susanna pleaded not guilty, but in the end she was found guilty and condemned to death.

On Tuesday, July 19, 1692 Susanna Martin, Sarah Good, Rebecca Nurse, Sarah Wilde, and Elizabeth Howe were taken from their cells, put into a cart and driven up the rocky road to Gallows Hill. While Rebecca Nurse prayed, Rev. Nicholas Noyes exhorted Sarah Good to confess saying, “You are a witch, and you know you are a witch.” She replied, calling him a liar and saying that she was no more a witch than he was a wizard and… “if you take away my life, God will give you blood to drink.” Tradition says that Rev. Noyes died of an internal hemorrhage, bleeding profusely from the mouth.

“The bodies were thrust into a shallow grave in a crevice of felsite.” There is historical evidence that the body of at least one of these women, Rebecca Nurse, was secretly removed and given Christian burial; “this was the hour and the power of darkness when a son could not say where he had buried his mother.” Susanna was buried in a shallow grave near the execution site with the other victims but because the exact location of the executions has never been found, it is not known where her body currently lies.

In 1711, the General Court granted compensation to many of the victims or their heirs, but Susanna’s children made no application to the authorities and they received nothing.  Susanna was not among those whose attainder was lifted.

“Let Goody Martin rest in peace, I never knew her harm a fly,
And witch or not – God knows – not I?
I know who swore her life away;
And as God lives, I’d not condemn
An Indian dog on word of them.”

Lone Tree Hill, a famous historical site, bore a tablet on its westerly side marking the site of George and Susanna’s home. The boulder which marked their homestead has been moved to make room for a highway, and it can be found on the map where the highway crosses Martin Road in Amesbury. The marker lies nearby. George was one of the largest landowners in Amesbury. The inscription on the marker reads: “Here stood the house of Susanna Martin. An honest, hardworking Christian woman accused of being a witch and executed at Salem, July 19, 1692. She will be missed! A Martyr of Superstition. T.I.A. 1894.”

Any comments or queries are welcomed by Bonnie Johnson.