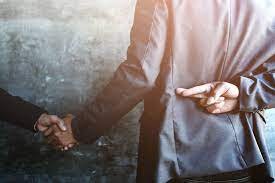 The Subject of Lying to Others

The subject of lying comes up periodically, and whether or not it is right to use lies in our communications with each other.

If we are captured by an enemy, and are aware of the truth, we may lie to protect ourselves and our friends.

If we are in a position where government, which has allowed itself to lie to us, demands the truth from us, it may be better not to answer any questions, and maybe much wiser to just keep asking questions.

If one is a spy, lying is the normal way of communicating.

If one is a cop with a set ticket goal, lying to travelers may be the only way to achieve the set goal of ticket numbers.  It has also been my experience that traffic cops will often add bogus charges to a ticket to give the prosecutor and the judge some room to play with.

If one is immature and/or insecure, one will likely lie when events go sideways.

If someone is out to defraud you of your money or property, expect lies that are subtle and/or half truths, but are not the complete truth at all.

If someone’s religion says they are gods and you are cattle, they will lie to you, manipulate you, and control you, because you are meaningless lower life forms to them, put in place to serve them.  Building trust with these people is often quite difficult, at best, or even impossible.

If someone considers you an enemy or an opponent in any matter, expect lies from them – this will be the weapon of choice.

If someone does not respect you as an equal, expect lies.

I have long believed that one of the great failings in government education is that government schooling 1) considers you of little or no value, 2) will lie to cover their own hidden agenda, and 3) will never teach you how to detect lies and fraud.  I only know this from having studied fraud examination and analysis in earlier years.

It’s odd, but it should also be noted, people in government invariably believe it is a ‘crime’ for you to lie to them, but lying to you is just normal daily procedure for them.  You are, after all, just another slave on the plantation, and they represent the exalted plantation masters.

And then there is the huge modern problem of government secretly spying on all of its own people, all the time.  Every citizen is now a criminal in the eyes of the government spies.  And spies have secrets and spies lie, remember?

“No one can imagine himself free if his communion with his fellows is interrupted or submitted to surveillance.” – Francis Lieber, On Civil Liberty and Self-Government (1853), Chapter IX

The only answer to all of these problems that I can envision is to become a truth teller.  One does that at certain risk because crime lords do kill their opponents, so being a truth teller in a system of lies can be a deadly choice – meant for those with great courage, with nothing left to lose, and/or with the great and honorable goal of helping other achieve freedom from the evil bas-tard system of manipulation and control.

Have a nice day, and think good truthful thoughts, eh.