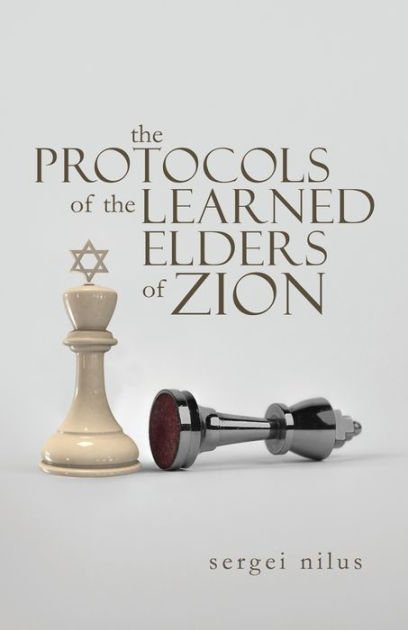 Question: Are the Protocols of the Learned Elders of Zion Authentic?

There is one historic document that is always sure to raise an intense and usually open display of anger from the non-Semitic Ashkenazi Jews, and that is the document called the ‘Protocols of the Learned Elders of Zion.’

If you are not familiar with the Protocols, and would like to read a copy of them, here is a link to one online source:

One has to ask why is there all of this anger and hatred from a religious group for a single document allegedly written in the late 19th century.  The anger and ire from the Talmud Jews just does not make any sense to the open and honest mind.  Is there an equivalent hatred of any single other document coming from the Christians, or maybe the Muslims?  Do the Christians and Muslims cry ‘anti-Christian’ or ‘Anti-Muslim’ with such vehemence and such hatred for any single document as do the Ashkenazi when they cry anti-Semitic?  Why not?  Are the Protocols true and accurate?  One source thinks so.

“The Protocols of the Learned Elders of ZION may be briefly described as a blueprint for the domination of the world by a secret brotherhood.  Whatever may be the truth about their authorship and, as will be shown, this has been the subject of bitter dispute there can be no doubt that the world society to which they look forward is nothing more or less than a world police state.”

The Protocols, since their early publication and translations into many languages, have been discussed for generations, and I offer here a few quotes from those who believe in an actual and huge human conspiracy, and who give the Protocols some credibility and some legitimacy.

“Whence come this uncanny note of prophecy, prophecy in part fulfilled, in parts far gone in the way of fulfillment?  Have we been struggling these tragic years to … extirpate the secret organization of German world dominion only to find underneath it, another, more dangerous because more secret?   Have we … escaped a Pax Germanica only to fall into a Pax Judaeica?”  —  The Times, London, May 8th, 1920

“Upon that much-vexed subject the authenticity of …  The Protocols of Zion we shall not enter, except to say that, if the document is a forgery, as alleged, then it is one of the most remarkable in the history of literature.”  —  The Spectator, London, October 16th, 1920

“Those who feel libeled by the Protocols have the most obvious remedy in the world; all they have to do is to ruse and denounce the policy of them, instead of denying the authorship … But when you come to read them how can any reasonable man deny the truth of what is contained in them??”  —  Norman Jaques, M.P., Canadian House of Commons, July 9th, 1943

“Whosoever was the mind that conceived them possessed a knowledge of human nature, of history, and of statecraft which is dazzling in its brilliant completeness, and terrible in the objects to which it turns its power.  It is too terribly real for fiction, too well sustained for speculation, too deep in its knowledge of the secret springs of life for forgery.”  —  The Dearborn Independent, July 10th, 1920

“The United Nations is Zionism.  It is the super government mentioned many times in the Protocols of the Learned Elders of Zion, promulgated between 1897 and 1905.”  —  Henry Klein, New York, Jewish Lawyer, in ‘Zionism Rules the World,’ 1948

“The only statement I care to make about the Protocols is that they fit in with what is going on.  They are sixteen years old and they have fitted the world situation up to this time.  They fit it now.”  —  Henry Ford in the New York World, February 17th, 1921

“Unless Bolshevism is nipped in the bud immediately, it is bound to spread in one form or another all over Europe and the whole world, as it is organized and worked by Jews who have no nationality and whose object is to destroy for their own ends the existing order of things.”  —  British Government White Paper, Russia No. 1 (1919)

“There is now definite evidence that Bolshevism is an international movement controlled by Jews; communications are passing between the leaders in America, France, Russia and England, with a view to concerted action.”  —  Directorate of Intelligence, Home Office, Scotland Yard, London, in a Monthly Report to Foreign Embassies, 16th July, 1919.

“This movement among the Jews is not new.  From the days of Spartacus-Weishaupt to those of Karl Marx, and down to Trotsky (Russia), Bela Kun (Hungary), Rosa Luxembourg (Germany), and Emma Goldman (United States), this worldwide conspiracy for the overthrow of civilization and for the reconstitution [reconstruction] of society on the basis of arrested development, of envious malevolence, and impossible equality, has been steadily growing.”  —  Winston Churchill in Illustrated Sunday Herald, 8th February, 1920.

I offer these thoughts and these quotes to counter the huge Zionist controlled media imbalance that says the Protocols are a hoax and a fraud.  Interestingly enough, these same charges of Protocol fraud come from a people whose military intelligence group has the motto: “By way of deception, thou shalt make war.”  Why all of the secrecy and all of the fraud?

If you are critical of one or more of these quotes, do not attack the author – attack the message.  If you can, provide some evidence the Protocols are NOT authentic, please do so.  No bull crapola.