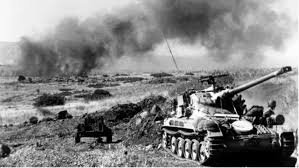 U.S. Will Recognize the Golan Heights as Israeli Territory. Really??

I have a few thoughts for this horrible news.  The first thought is that like all zio-american actions, this one is also internationally illegal.  The second thought is that the rush to pass House and Senate bills supporting this illegal action shows us who Congress works for, and it ain’t the American people.  A third thought might be that the Senate action is being created and pushed by Ted Cruz, the Canadian senator from Texas.  And, maybe a fourth thought might be to inquire why zionist israel always goes to the US for agreement with its illegal actions, rather than go to the UN.  What is wrong and illegal about these zionist israeli actions?  Hint:  Everything.

And BTW, when was the last time anyone in the feral government asked your thoughts on how to deal with international affairs?  Never?  Is that because you are considered incompetent or irrelevant by the wankers?

If the US government actually worked to defend, protect, and support the American people, rather than defend, protect, and support the illegal zionist military regime of israel, I might suggest that we contact our alleged representatives, but since they don’t support America, I won’t.  Having said that, I realize there are (or may be) still some people left in America who believe the American government is of value and that it actually works ‘for’ the American people, and if you are one of those folks, do your thing.

BTW, I often make challenging comments like these in an effort to get people to see things differently, and I am always looking for my opinions to be challenged and/or proven wrong.  Sadly, people rarely ever try to prove me wrong, but they often attack me personally for my beliefs and opinions, and that is a lost cause.

At any rate, to get on with the subject at hand:

“Israeli Prime Minister Benjamin Netanyahu has been pressuring the U.S. to support Israel’s illegal annexation of the Syrian Golan Heights. Accordingly, President Trump has announced that the U.S. will now recognize this as Israeli territory, and some Republican Congressmen have introduced legislation that would make it law.

This pandering legislation would recognize an Israeli action that violates international law.

It is sponsored by Wisconsin Republican Mike Gallagher and has 23 co-sponsors; all Republicans. It has been referred to committees.

It is sponsored by Ted Cruz (R-TX) and has 7 cosponsors, all Republicans.

Both bills have been referred to committee. By immediately telling your representatives to oppose this legislation, you show politicians that we’re aware of this effort and will work to oppose it!

Have a nice day, and for us all, let’s try to figure out how to remain free in an unfree world.