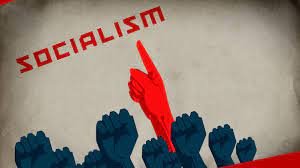 Republic vs Socialism and/or Communism

Republic vs Socialism and/or Communism – is that really the current American political question?  Perhaps, but I think not.  Why not?  Because it appears to me that all governments, especially outside governments, regardless of their structure, end up being organized criminal gangs of controlling elites that use force and violence to control the citizenry as well as their manipulative and forced control of outsiders via economic and military wars.

I have not yet found evidence of any government, especially communist governments or governments derived from the English ‘royal’ colonies, that have been based on providing a voluntary, unforced set of services to any people.  It just doesn’t work that way.  Government always uses forced controls over the people.

Maybe the real choice for humans everywhere is government slavery vs freedom from all government controls, eh?

Historically, and interestingly enough, Americans had a brief chance at freedom and liberty as they risked their lives and fortunes and headed west, away from the Atlantic coast and always away from the increasingly controlled eastern cities and states.  Sadly, and somehow creepy, government always seemed to follow the people west.

Rose Wilder Lane (December 5, 1886 – October 30, 1968) discusses this phenomenon in her book ‘Discovery of Freedom,’ published in 1943 and available as a free download from Highlander.  The following YouTube podcast entitled ‘Roger MacBride and Rose Wilder Lane: A Libertarian Legacy,’ by Jeff Riggenbach of the Mises Institute, describes Lane’s life and evolution from communist supporter to believer in individual freedom and liberty.

Lane’s progression in thinking through her adult years, is described chronologically by Riggenbach, and I recommend that you take a few minutes and listen to the whole podcast.  I’ve downloaded and saved a copy of this podcast, because in this age of massive government and media censorship, I just don’t know how long it will be made freely available to others.

This same Jeff Riggenbach podcast also introduces us to the early years of the fledgling Libertarian Party, which Roger McBride introduced to America in the 1972 election cycle, and in which he (McBride) ran as its presidential candidate in 1976.  But McBride eventually abandoned the Libertarian Party and went back to the GOP.  Sensible movement by some, crazy to others.  But, the dark side of the libertarian movement is that it too believes in government, and that is a problem for me.

So, in today’s world, humans appear to be faced with the choice between being controlled by governments, which are, in turn, dominated by shadow controllers of some political party, or to experience individual freedom and liberty away from all government controls.  And yes, seeking and obtaining individual freedom and liberty in a largely unfree world are now difficult at best.  Ours appears to have been a long history of plantation mentality where there are masters (royalty) who determine the lives and fortunes of the people (slaves).  Not a fun realization, I admit.

To me, this is similar to the idea of using another man’s guns to control your alleged enemies.  And sadly enough, in modern America, and thanks to the ruling cabal in the US government, Americans have been taught that our neighbor is our enemy.  Really?  Did the American people ever ask to be divided against each other, or was this just another covert manipulation by the shadow rulers?  What about the Constitution?  Did the American people ever delegate this responsibility to political wankers?  I don’t think so, and neither does Bill Buppert.

“The Constitution is an enabling document for big government. Much like the Wizard of Oz, the man behind the curtain is a fraud.  In this case, for all the sanctimonious handwringing and the obsequious idolatry of the parchment, it sealed the fate of our liberties and freedoms and has operated for more than 200 years as a cover for massive expansion of the tools and infrastructure of statist expansion and oppression.” — Bill Buppert

What is the alternative to having outside government controls over us?  Let’s ask the people in Cheran, Mexico who on April 15, 2011 threw out the narco government, the politicians, and the drug lords, and took control over their own lives under a form of self defended, self government.

“The community approached local and municipal authorities on repeated occasions asking for help — all to no avail.  Frustrated, several members of the community banded together and, under the leadership of a group of courageous women, they took matters into their own hands.  Early in the hours of April 15, 2011, they faced down the trucks used for the clandestine cutting of trees.  In another documentary titled “Cherán: tierra para soñar” (Land of our dreams), one of the women who took part describes the events of that fateful day:

“When we set out it was dawn and still dark, around 6:30 in the morning. The church bells were ringing calling people to mass […] I never really thought this would go far […] We were just five women from here, from this neighbourhood, a bunch of older women, there were no men, maybe a few men but mostly women […] We chased after the cars throwing stones, one woman even got hit and scraped all the skin off her knee when a car backed into her…”

The people of Cheran have now been free of domestic government controls for well over seven years.  On Sunday, May 27, 2018, the indigenous Purépecha municipality of Cherán, Mexico, named its Third Council of Elders (Consejo Mayor, Consejo de Keris) to their communal government.  The people did this – the politicians did not.  Think about this.

This is how a people become free.  They get fed up with being slaves and being taken advantage of, and they rebel against the masters.  Are we Americans going to do this also, or is the fluoride too intense in our water supplies, and the big pharma drugs too prevalent on our American streets?  Americans were once free.  Will we become free once again, or will we succumb to government controls and remain slaves to the plantation owners of America forever?  Have the days of the shadow government rulers come to an end, or will all of humanity suffer under their New World Order government controls?

We live in interesting times.  Let’s not let them go to waste.