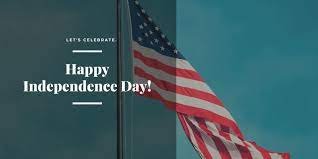 Let’s Celebrate Independence Day, Shall We…

Let’s celebrate Independence Day, shall we

In Mexico, May 5 (aka Cinco de Mayo) is observed as a holiday to commemorate the Mexican Army’s victory over the French Empire at the Battle of Puebla, on May 5, 1862.  Having noted that, there are also many other historical events that also happened on the May 5 date.

Karl Marx was born in Trier, Germany on May 5, 1818.  On May 5, 1821 Napoleon Bonaparte died while still in exile on St. Helena.  The first U.S. train robbery took place in North Bend, Ohio on May 5, 1865.  On May 5, 1904, the Boston Americans’ Cy Young pitcher threw the first perfect game in the modern era of baseball.  On May 5, 1961 Alan Shepard became America’s first space traveler when he made a 15-minute suborbital flight in a capsule launched from Cape Canaveral, Florida.

I’m pretty certain I have not included every notable event for May 5, but it does appear that lots of important events happened on the May 5 date in history.

Canada has its Dominion Day, and that date is July 1.  On July 1, 1867, Canada allegedly became a self-governing dominion of Great Britain and a federation of four provinces: Nova Scotia; New Brunswick; Ontario; and Quebec.  The anniversary of this date was called Dominion Day until 1982, but since 1983, July 1 has been officially known as ‘Canada Day.’  For Canadians, July 1 is still an important date.

And, like May 5, lots of things also happened on July 1 in history.  For example, on July 1, 1747, there was a battle at Lafeld (aka the Battle of Lauffeld) where France beat the British/Dutch army and which left the Dutch Republic open to invasion.  July 1, 1776 (or July 2, depending on your source) was the date of the first vote made by the Second Continental Congress on a Declaration of Independence for Britain’s North American colonies.  On July 1, 1798 Napoleon Bonaparte took control of Alexandria, Egypt.  On July 1, 1862 the U.S. Congress established the Bureau of Internal Revenue.  Etc., etc.  You get the idea.  Something important has happened on every day of the year, and that realization brings us to today’s date of July 4 and its meaning to the American people.

According to Yale professor, Joanne Freeman, “The American Revolution entailed some remarkable transformations – converting British colonists into American revolutionaries, and a cluster of colonies into a confederation of states with a common cause ‐‐ but it was far more complex and enduring than the fighting of a war.  As John Adams put it, “The Revolution was in the Minds of the people… before a drop of blood was drawn at Lexington” – and it continued long past America’s victory at Yorktown. This course will examine the Revolution from this broad perspective, tracing the participants’ shifting sense of themselves as British subjects, colonial settlers, revolutionaries, and Americans.”

As we all are probably aware, the actual and physical revolution started on April 19, 1775 in Lexington and Concord, Massachusetts where the shot was fired that was heard around the world.  For an historical review of the early battles in Lexington Concord, and elsewhere, Frank Coburn’s history is a pretty good and detailed summary of those early events.  As he points out, “But the student in American local history needs a more extensive view of the operations of that day. He needs to be better informed as to the various scenes of carnage that were waged along all of those nearly twenty miles of high-way. Men were slain in Lexington, and in Concord; but there were many others slain in Lincoln, in Arlington, in Cambridge, and in Somerville. Nor should we forget the youngest martyr of the day, but fourteen years of age, who fell in Charlestown.”

So, it appears that the British colonist’s ideas of freedom and independence from English controls were many years in forming, culminating in actual military conflicts starting on April 19, 1775, and resulting in the signed Declaration of Independence on July 4, 1776.

As a follow-on note, the Continental Congress adopted the Articles of Confederation, the first constitution of the United States, on November 15, 1777.  However, ratification of the Articles of Confederation by all sovereign thirteen states did not occur until March 1, 1781.  The ‘Articles’ created a loose confederation of sovereign states and a weak central government, leaving most of the power with the state governments.

The Treaty of Paris of 1783 formally ended the American Revolutionary War.  Benjamin Franklin, John Adams, and John Jay negotiated the peace treaty with Great Britain.  In the Treaty of Paris, the British Crown formally recognized the 13 sovereign states and ceded most of its territory east of the Mississippi River to the United States, thus doubling the size of the new country and paving the way for westward expansion.

However, the impetus for a stronger and more effective American central government lay in wartime urgency, the need for foreign recognition and aid, and the growth of national feeling.  This perceived need for a stronger Federal government became apparent to some, and eventually led to the Constitutional Convention in 1787.  The present United States Constitution replaced the Articles of Confederation on March 4, 1789.

That’s the brief history of our humble American beginnings, but today we celebrate our 243rd Independence Day, July 4, 2019.  I suspect this may not be the proper venue for whining and complaining about all of the actual slavery elements found in today’s US government, but I do want to get us to think about shrinking and/or eliminating today’s central government and the 27 state governments that honor and respect Zionist israel over and above the freedom and liberty of our own American people.

In truth, there is not much about independence to celebrate today, especially when the POTUS and the central government, Comrade, are allegedly holding a military parade with Army tanks to help us understand who is the real boss (hint, it’s the federal government, aka the Zionist military empire).

So, on this July 4th date in 2019, and in the spirit of April 19th, I wish us all an historic celebration of our freedom and independence of British rule which has been, sadly enough, replaced by modern Zionist rule.  How lucky are we (somewhat facetious and rhetorical remark).

Have a nice day, and think good thoughts.